The affordability of homes in London has reached a record low, with residential property prices in the capital now 14.5 times the average salary.

This is more than double the UK’s average ratio, despite house price growth having slumped in London over the last 12 months. 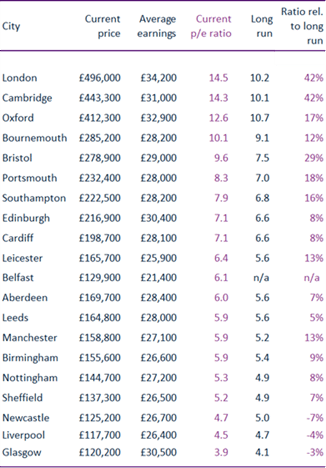 The ratio has been pushed up by a longer term rise in house prices, with the average value in the capital up by over 80% since 2009, which is far in excess of the growth of salaries, according to research firm Hometrack.

The measure offers a good indication of affordability levels across the country. As far as London is concerned, the data reveals that property prices in the city are around 60% higher than 2007, this ratio has been boosted by falling mortgage rates over the period, increasing the buying power of households, as well as real wages across the UK declining. The average price of a home in London is now £496,000, while earnings are £34,200 a year. 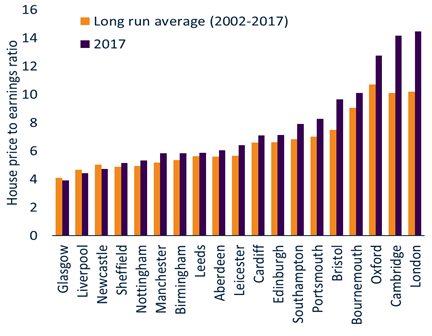 Cambridge, Oxford and Bournemouth also have house price to earnings ratios that are far higher than the national average, having witnessed double digit home price to earnings ratios. Strong property price inflation in Bristol has pushed the ratio to 9.7 times average earnings. These cities have affordability ratios that are 20% to 40% higher than the long run average, which suggests that there is little room for price growth in the near term. 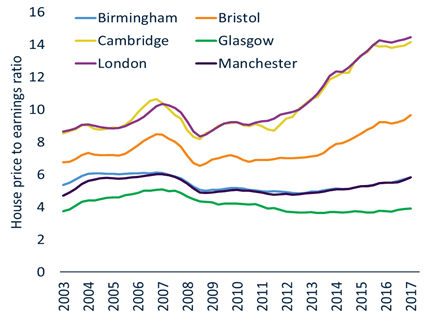 In most cities outside the South East, the price to earnings ratios has remained broadly unchanged in the last 15 years, and in Glasgow, Liverpool and Newcastle it is lower than the long-term average. This is partly because property prices in these cities have not bounced back far from their lowest point during the financial crisis in 2009.

Hometrack’s cities index found that house prices in the biggest 20 cities rose to a 13-month high of 6.1% in the 12 months to October. Manchester recorded the highest level of house price growth, at 7.9%, followed by Birmingham at 7.4%.

Despite recent house price growth, Manchester and Birmingham, along with Leeds, have been identified by Hometrack as potential property hotspots, as affordability is still attractive and unemployment continues to fall. 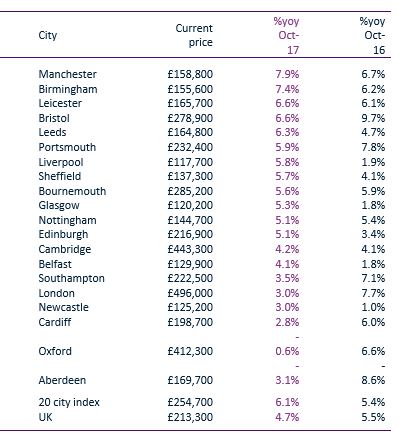 Assuming mortgage rates remain at historically low standards and the economy continues to strengthen, there is every reason to believe that property prices will increase steadily in regional cities over the next two to three years.”

But unlike many regional cities, London is expected to underperform over the next two to three years as house prices adjust to the levels that purchasers are prepared to pay, with Hometrack forecasting that prices in London need to fall by 6% in nominal terms to take the ratio to 30% over the long run average. For the ratio to reduce to 20% over the long run would require a 13% fall in property prices.

With RICS finding the housing market subdued, homeowners may have to brace …