This apartment sold in just three days thanks to stylish furnishings and smart staging. 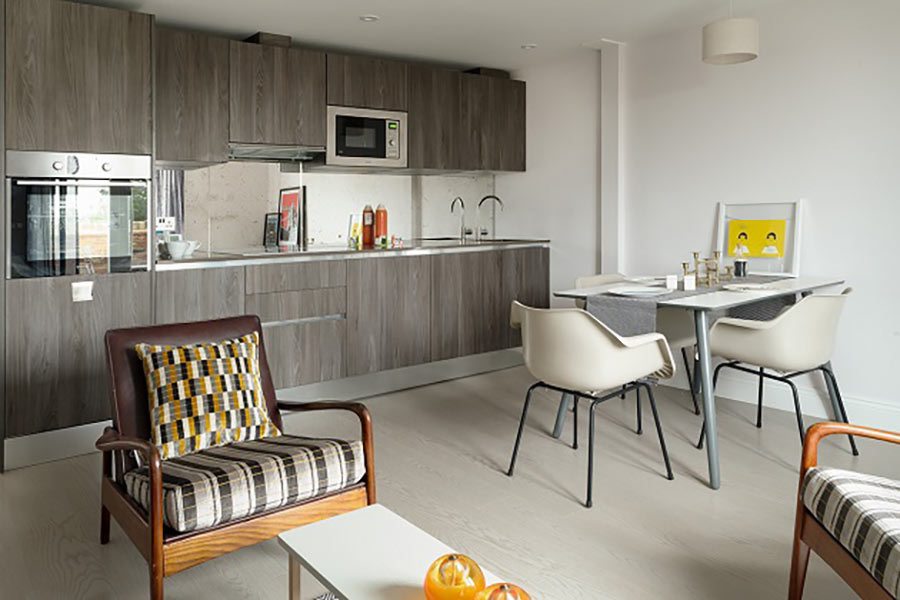 Success stories don’t always start well. Take this bolthole in Balham, which spent four months languishing on the market without interest from buyers – and without furniture. Interior designer Clare Pascoe of Pascoe Interiors spotted that this was the problem: “People were having difficulties visualising it furnished,” she explains.

The solution? Clare furnished the flat in her signature mid-century contemporary style. It was snapped up three days later. 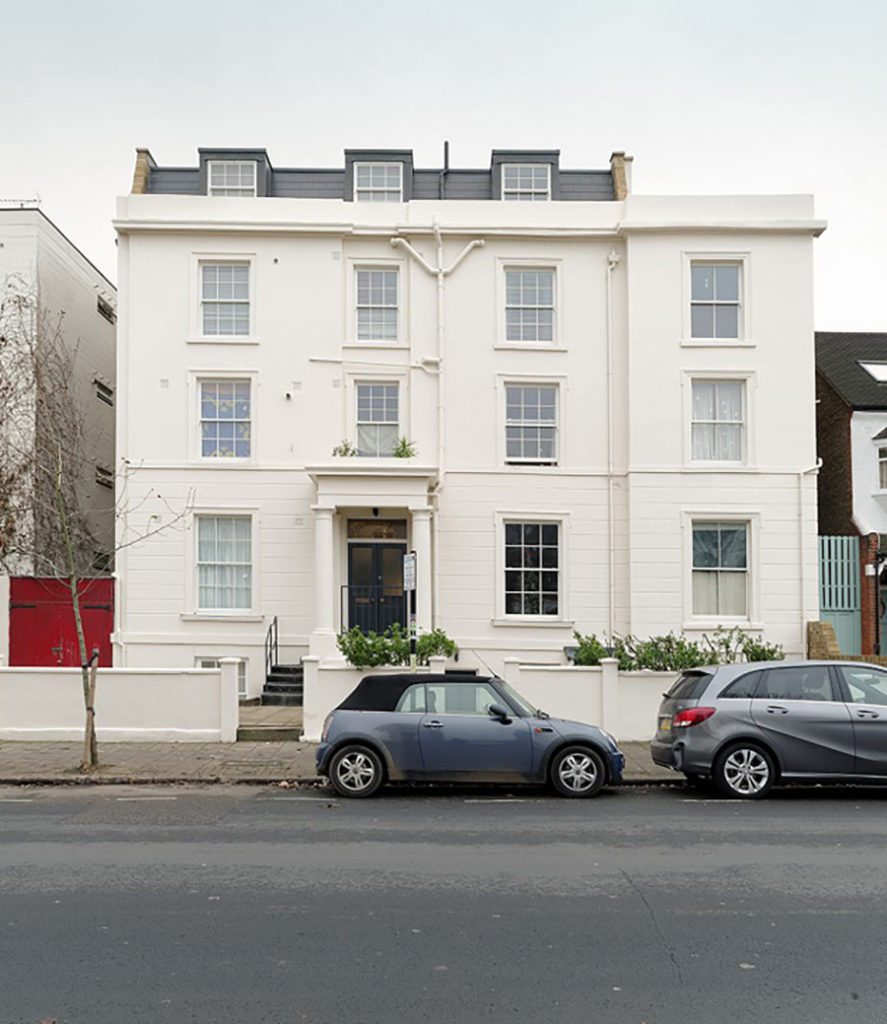 The apartment is one of two on the top floor of an Edwardian building. The floor itself is new, created by replacing a tatty shallow-pitched roof with a smart mansard. Several flats on the east wing of the building were extended to give an even footprint for the new floor, and the scruffy communal areas and facade were repainted and upgraded so that everyone in the building benefitted.

“Obviously those who had their flats extended had maximum disruption, because they also had the back end of their flats cut out at one point,” says Clare. “But the quid pro quo was the value of the extension.” 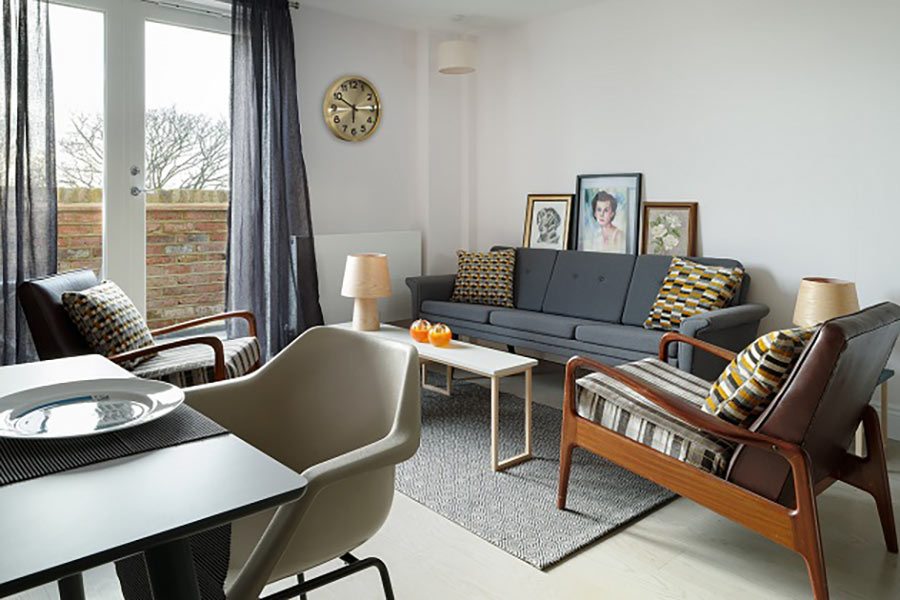 The project called for more than Clare’s eye for style. Her expertise really came to the fore when it came to making the most of such a small space.

The plans – already approved by the time Clare was brought on board – proposed that the neighbouring flat should be larger. Her first job was to challenge these plans, and against fierce resistance, Clare won her case for more space, which gained an extra window in the bathroom. “It sounds like a small victory but I think the flat would have been unsaleable without the second window,” she says. 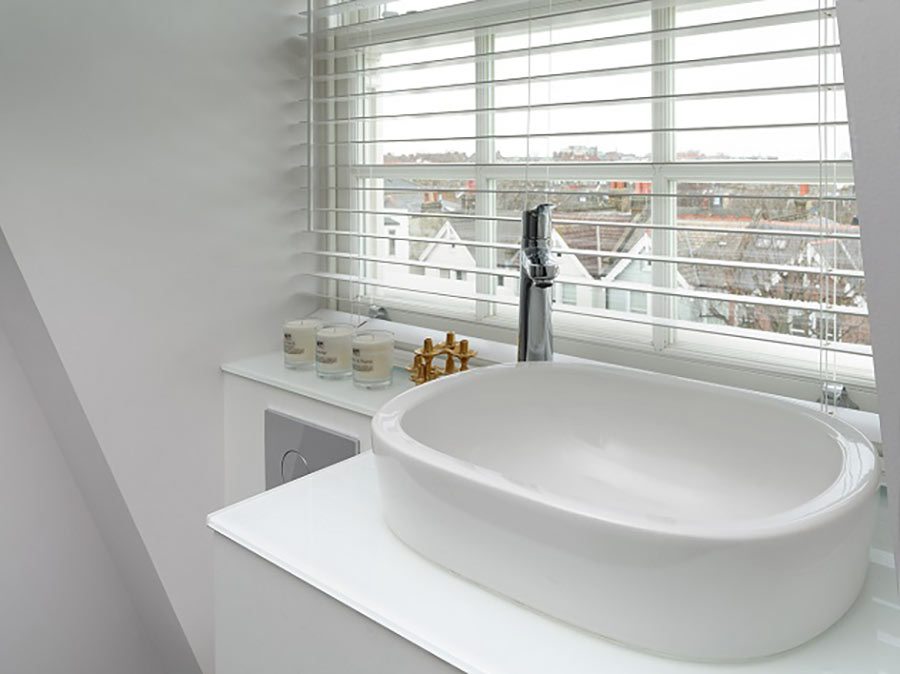 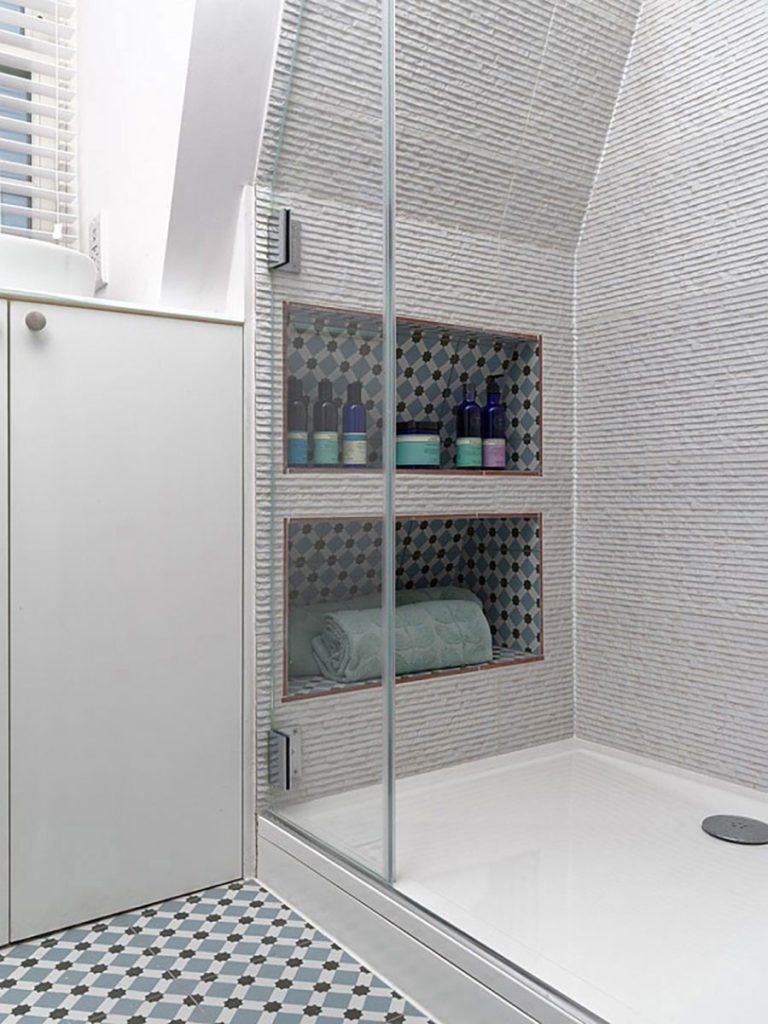 Winning the window in the bathroom meant that Clare could design a more efficient layout and then borrow some of the extra space for in-built storage in the adjacent bedroom. “We managed to create a 600mm depth space, which is 1.3m wide, with double hanging,” she says. 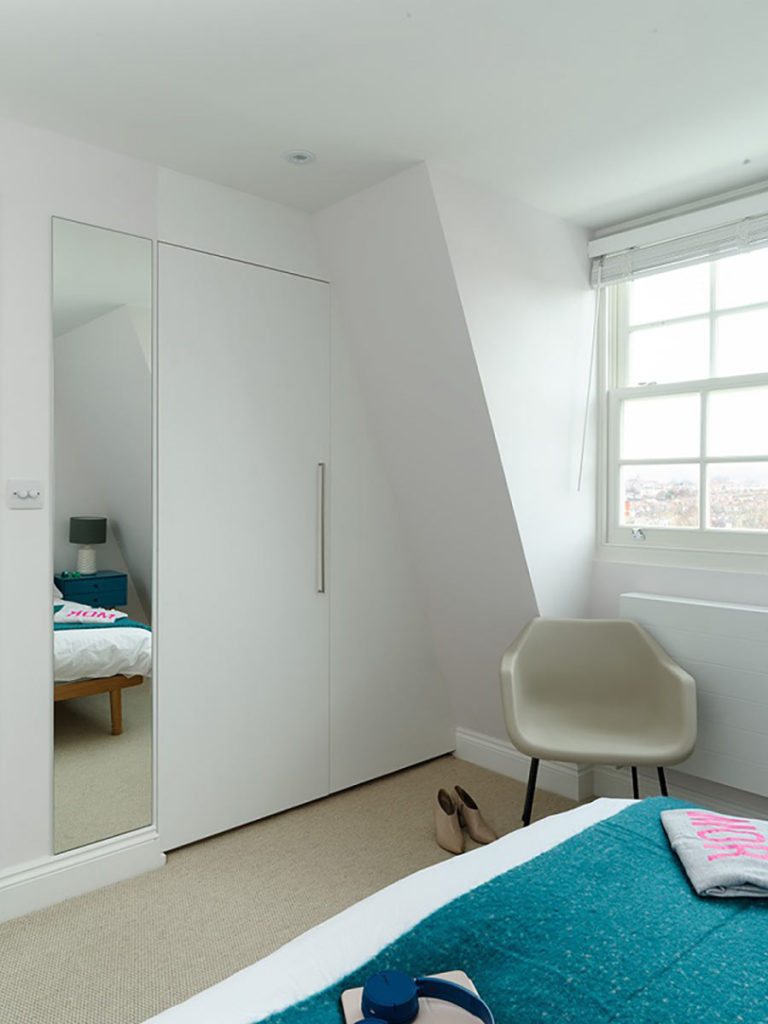 Clare had worked with the owners on another property in their buy-to-let investment portfolio. “Given that we knew one another already, the relationship and style parameters were already set,” she says.

She was also aware that the furnishing budget would be tight. For the floors and walls she headed to Topps Tiles and Carpetright. Furniture is also high street, sourced from John Lewis, HomeSense and eBay.

“I certainly shopped around for cheap things – not cheap in quality but getting bargains where I could. I loaned items as well so it wasn’t all purchased,” she explains. 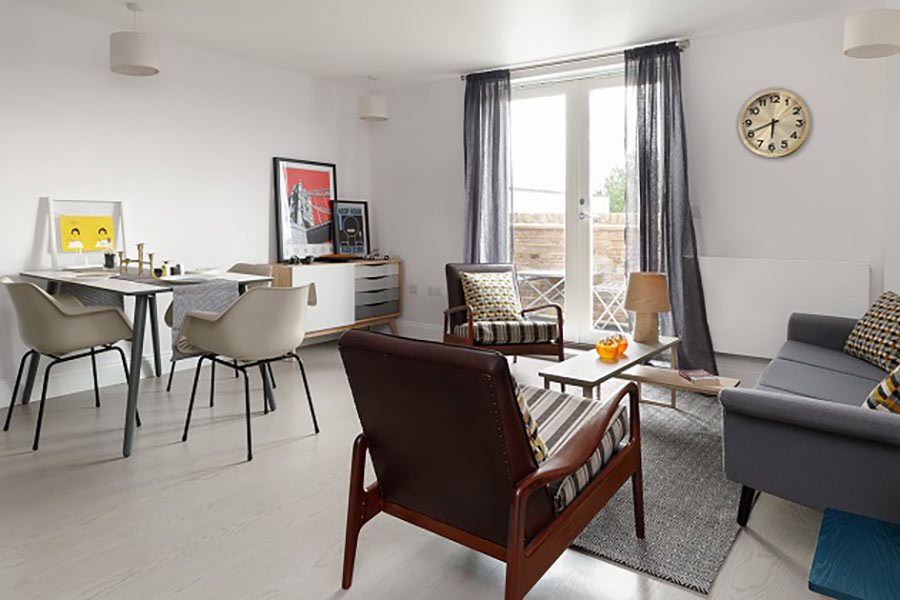 The fact that the apartment sold in three days is not only testament to Clare’s decorating style, but also to the power of staging a home for sale. “It’s about giving people that helping hand, to show them what they can do with the space,” says Clare. “They aren’t buying into the style per se – although it’s available to buy if they want it – but it’s about saying, ‘Look, see how much you can fit in a small space.’ The people who had seen it empty and came back once it was furnished were utterly amazed.” 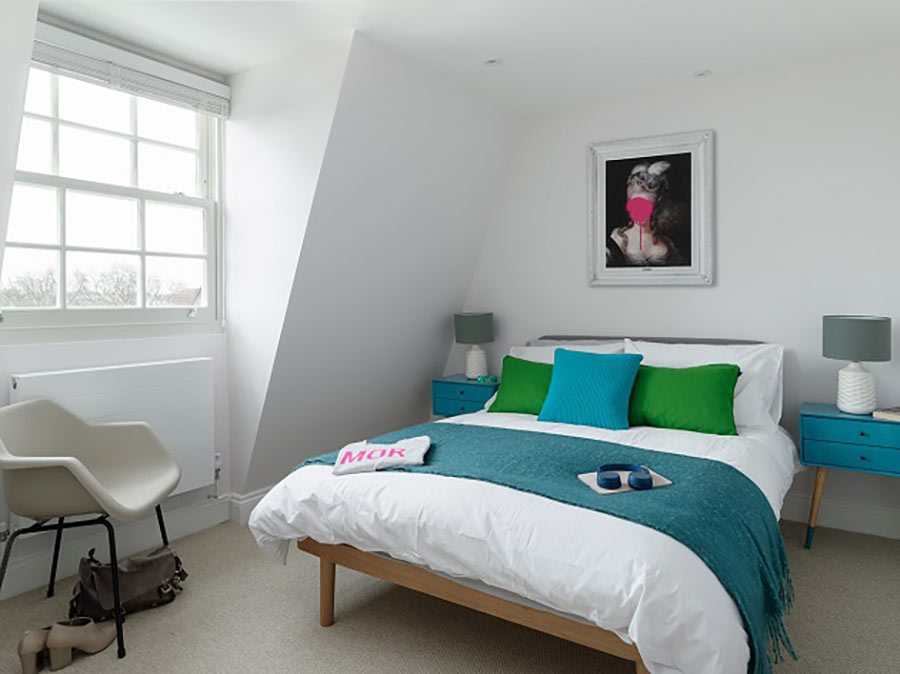 Which is your favourite feature and why?

I love the tiles in the bathroom. They’re from Topps Tiles, so accessible to anybody doing a project, but they instantly nod to the age of the building, which is important. A completely denuded, highly contemporary space wouldn’t have worked. It’s just soulless – it’s got no energy to it. Features like the tiles and the brass fittings on the sash windows give a lovely feeling to a small space.

Where do you source furniture and furnishings?

I try and buy best of British and champion British design and makers where I can. I aim not to source any further than Europe and avoid regions where you can commission similar products at a fraction of the cost, which I think is a false economy and obviously an awful lot of air miles to bring them in. I try to be responsible with design.

How achievable is this look?

It’s all achievable. We managed to find the sofa on eBay; it’s newly upholstered in a Bute wool to meet all the fire regs, so had the buyer wanted to rent the property, it would have been safe to do so. The dining table is just a simple John Lewis piece with Lucienne Day dining chairs to add a dash of designer.

The flooring in the living room is from a Portuguese brand called Granorte. It’s a cork substrate, so it’s very sustainable. Plus, it’s a natural sound proofer and heat insulator, so it’s also very practical. The paint is Leyland. The blinds are bespoke, but it’s not expensive to have Venetians made.

You chose a dark wood-effect kitchen rather than white. Why?

The kitchen units are from GM Cucine, I actually imported them from Italy, so it meant that I could get a really high-spec kitchen for a high-street budget. I wanted people to feel as if the kitchen’s in the living room rather than the living room’s in the kitchen, which is why I gave it a furniture feel. The mirrored splashback bounces the light around and gives depth to the room: you can sit in the living room and look to the kitchen, and the view continues on into the reflection.

How do you style a space without an owner in mind?

You don’t want to alienate anybody, and you don’t want to be particularly masculine or feminine. I imagined the buyer as a young man because most women are quite happy with a slightly masculine scheme but men generally don’t welcome a girly space. I then added some softer, feminine elements within it. 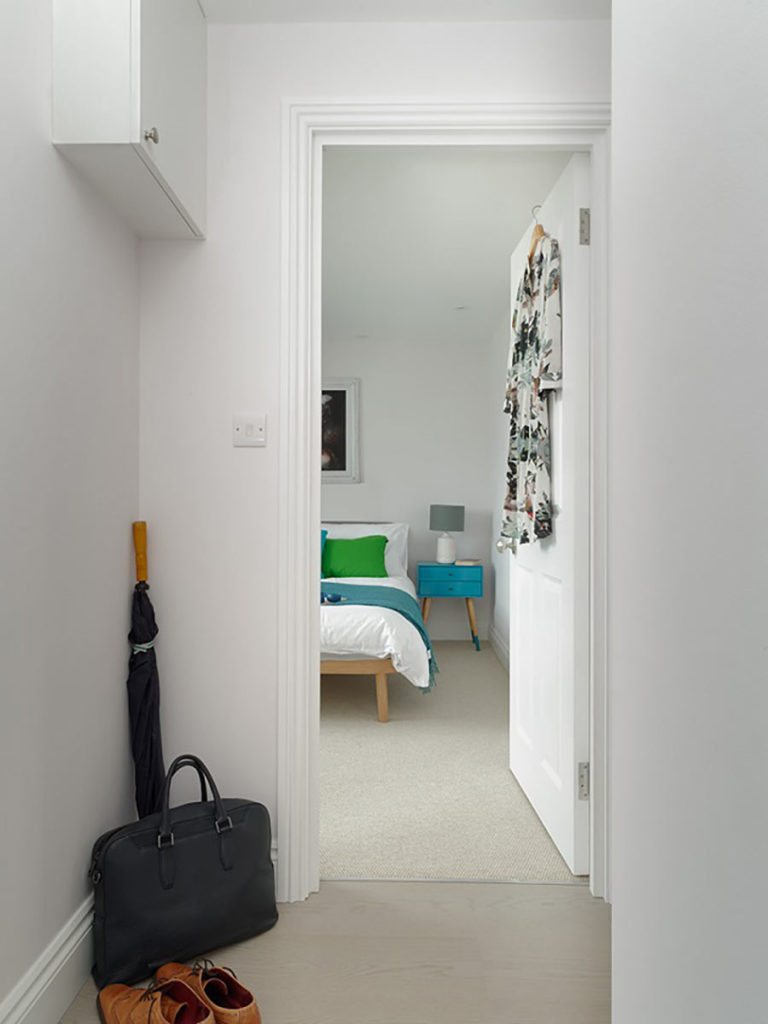 How to prepare your home for an upcoming sale