A couple would like the WC in their ensuite screened off from the rest of the room and want to include a bath and separate shower. Can Plug in Design help?

Dawn and Andy Gibson have extended their 10-year-old property with a large kitchen downstairs and new master bedroom above. This has resulted in a family re-shuffle with daughter Mia, 13, taking her parents’ old bedroom, freeing up Mia’s room to be converted into an ensuite for Dawn and Andy. 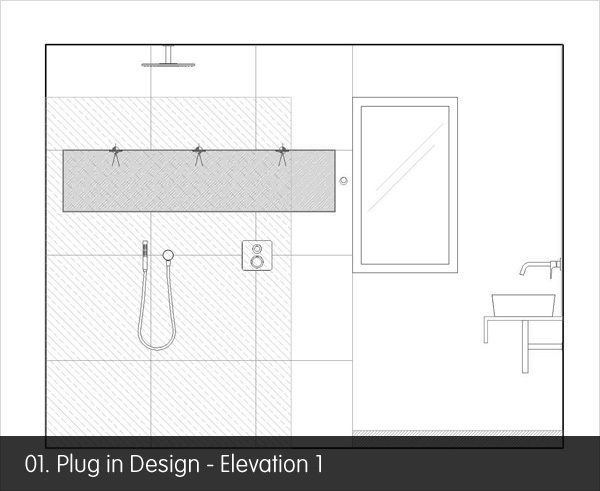 Dawn has very specific requirements for her new ensuite. She would like a shower so that she doesn’t have to compete with her two teenage children for the family bathroom during the morning rush, but she would also like a bath where she can enjoy a long soak and ideally she would prefer a freestanding design. Dawn has also asked that the WC be divided from the rest of the bathroom. The Gibsons prefer neutral colours but don’t want the bathroom to be dull. Dawn says, “We want the room to be a luxurious, grown-up space.”

The ensuite is virtually square, measuring 2.95 x 2.8m. Previously Mia’s bedroom, there is no existing plumbing so the designers are not tied to the location of the soil pipe which usually dictates the position of the WC. The bedroom window was on the end wall. This is now a door leading into the master bedroom extension. A new window will be opened up in the side wall, but due to planning restrictions this will be small, measuring just 60cm wide. As such, there is a risk that with limited natural light the new ensuite could be gloomy.

Frances James has a degree in interior architecture and works for Leicester-based Plug in Design, an interior design practice with experience across both domestic and commercial projects.

“After studying the clients’ brief, the starting point for this project was to hide the WC,” says Frances, who chose to position the toilet in the back right corner of the room so that it would not be the first thing the Gibsons see on entering the space. The wall-hung WC has a space-saving short 50cm projection and water-saving dual flush. A stud wall would be built to screen the WC from the bath, while a second false wall behind the WC conceals the cistern and features integrated storage for toiletries, towels and spare toilet rolls. 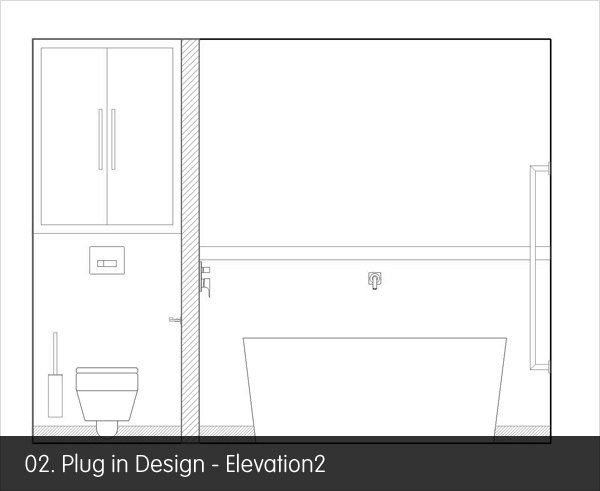 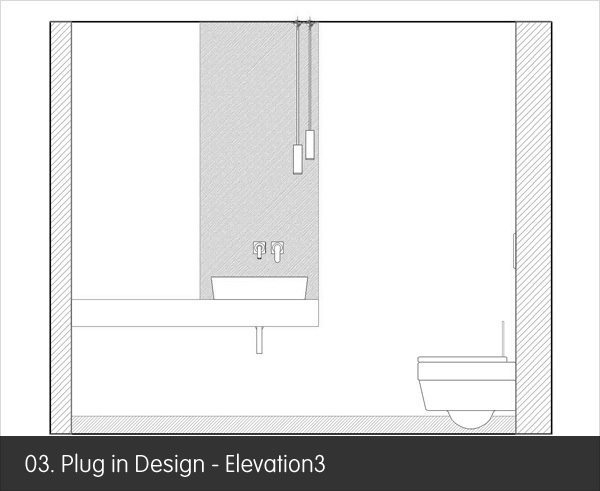 In response to Dawn’s request for a freestanding bath, Frances chose the Victoria & Albert Ios in tactile volcanic limestone teamed with a Citterio M bath spout from Hansgrohe. The soft oval of the bath is repeated in the Ios basin, which sits on a wood countertop with the front edge concealing the basin trap. “Behind the basin we would fit a bespoke mirror spanning from the ceiling to the countertop. This acts as a splashback and gives height to the room. The wall-mounted basin tap is plumbed through the mirror,” explains Frances. 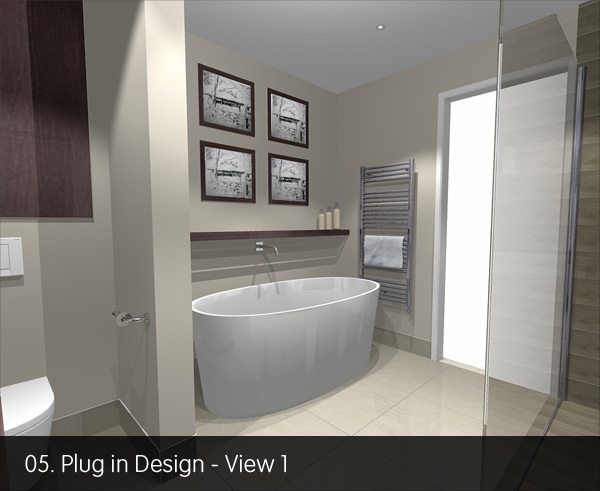 To illuminate this area Frances suggests two pendant lights, IP rated for use in the bathroom. These are staggered in height to create an eye-catching feature. The pendant lights and alcove spots create a soft, ambient glow for when the bathroom is used for relaxing. Ceiling spots and an extractor fan are operated on a separate circuit. 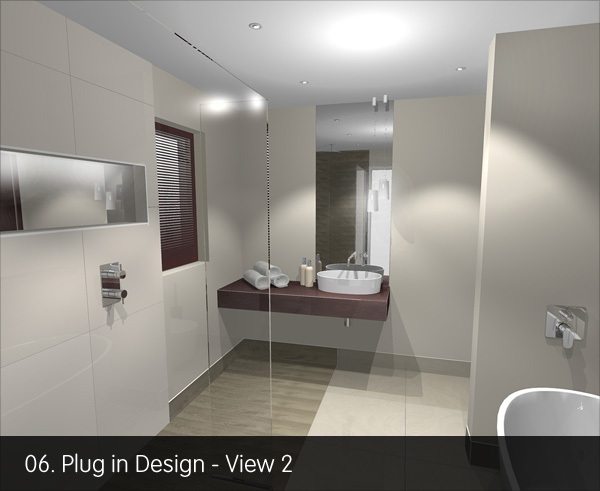 Frances found space to include a walk-in shower with wetroom floor and glass screen from Matki. “By choosing a frameless screen the focus remains on the tiled feature wall rather than the enclosure,” she says. A stud wall in this area conceals the shower valves, which control a fixed round head plus a hand-held shower also from the Citterio M range. An alcove in the stud wall, meanwhile, has a mirrored back and is designed to bounce light into the space and act as a useful shelf for shampoo or shower gel. 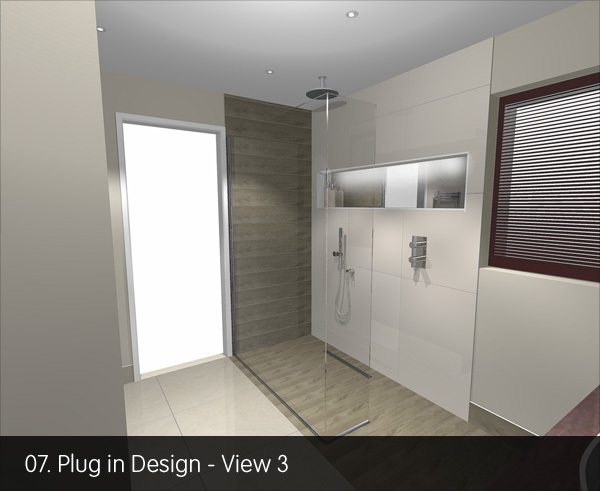 Frances chose large-format concrete-effect tiles in warm grey for the floor and off-white for the walls. The grout is colour matched to give the effect of a solid surface. In the shower, wood-effect Linea tiles cover the floor and continue up the wall. The wood theme is repeated in the walnut countertop, cupboard doors and bath shelf. Underfloor heating runs throughout the bathroom and there is a conveniently placed heated towel rail at the end of the bath.

Andy says, “Helped by the minimal glass shower screen and large mirror behind the basin, this bathroom looks spacious, whilst the dividing wall next to the toilet still creates a feeling of privacy.”

Dawn likes Frances’s choice of pale tiles and contrasting wood. “We have dark wood furniture in our bedroom so this colour scheme flows naturally on from that. I like the thoughtful touches such as the built-in storage and pendant lights. This is a sophisticated, grown-up bathroom where we could get ready for work but also relax in that lovely deep tub.”

How Much Will My House Be Worth in 10 Years?

How Much Value Do New Windows Add To A Home