A sharp rise in residential property prices has defied gloomy warnings during the recession of 2007-2009.

The 5-3 vote by the Bank’s policymakers last week was the closest for a rate rise since 2007, and comes with inflation close to a four-year high of 2.9%.

But while a prolonged period of low rates has made it virtually impossible for savers to earn a worthwhile return, they have supported strong increases in stocks, bonds, and of course property prices.

Record-low mortgage rates in recent years have supported demand from property buyers, helping to drive up house prices, leaving many more recent potential purchasers with little choice but to increase their borrowings, or depend on family members to help fund a deposit.

For many people, home price rises are occurring at an unattainable rate, with property prices now at a record 7.6 times earnings, owed largely to the surge in property values since the Bank of England cut interest rates to just 0.5% in March 2009.

Fresh analysis of Land Registry data by online estate agents HouseSimple shows that the average price of a home in the UK has increased by 41.2%, or almost £60,000 on average, since interest rates were cut to 0.5% eight years ago (the base rate was reduced to 0.25% in August 2016), led by growth in Cambridge and London where the average property has almost doubled in value.

Overall, the study of 100 UK towns and cities between March 2009 and April 2017 has found that the South East of England has fared particularly well, with seven of the 10 biggest property price rises since March 2009.

Cambridge, London and Slough have all seen average home price growth of more than 90%. However, at the other end of the performance chart, Hartlepool has recorded a 9% drop, Durham a 6.2% fall, while prices in Middlesbrough are down 4.5%, In fact, all regions in the North East have seen prices fall.

The following table shows the UK towns and cities that have seen the biggest rises in average property prices since interest rates fell to 0.5% in March 2009: 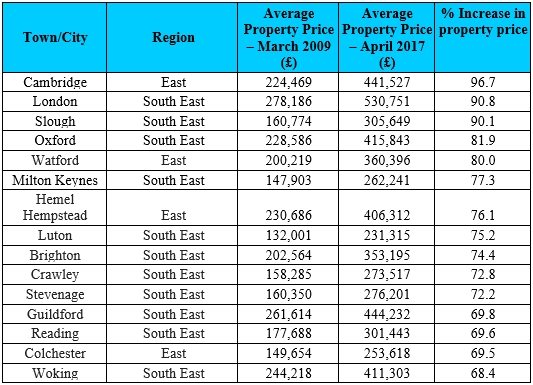 The following table shows UK towns and cities that have seen the worst property price growth since interest rates fell to 0.5% in March 2009: 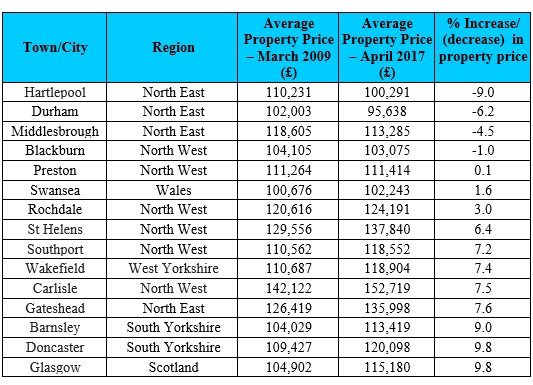 House prices across the capital have increased on average by 90.8%, led by gains in the borough of Kensington and Chelsea, with average prices increasing by 128.9%, while the less glamorous boroughs of Haringey and Waltham Forest have witnessed impressive price growth since March 2009, with price growth of 111.7% and 106.4% respectively.

Surprisingly, the trendy borough of Camden (74.9%) was one of the worst performing boroughs, although average prices have still grown over 30% more than the UK as a whole.

The following table shows the London boroughs that have seen the biggest rises in average property prices since interest rates fell to historic low of 0.5% in March 2009:

The following table shows the London boroughs that have seen the small rises in average property prices since interest rates fell to historic low of 0.5% in March 2009:

Alex Gosling, CEO of HouseSimple.com, said: “While UK savers have suffered over the past eight years, millions of homeowners have increased their equity in their homes substantially in this once-in-a-generation low interest rate environment. It’s been a golden period for UK homeowners, but there are signs that it could be coming to an end as the MPC narrowly voted to hold interest rates at 0.25%.

“House prices are also under pressure from the political and economic uncertainty of Brexit and the fallout from the disastrous General Election result for the Conservative Party. There is no evidence to suggest that property prices are about to plummet, but homeowners and home buyers do need to plan ahead, and make sure they can cover the impact of interest rate rises on their monthly mortgage payments.

“Many homeowners will have never seen an interest rate rise, and may believe rates will never rise. But they will eventually, and when they do, we could see rates rise by 1%-2% quite quickly. With many households already feeling the strain of higher day-to-day costs, monthly mortgage payments going up by several hundred pounds a month could tip them over the edge.”