Modern hobs are energy efficient and make cleaning a breeze. Our guide will help find you the right one for your lifestyle.

A good hob is an essential element of your kitchen, whether you’re a reluctant cook or a confident chef. With the right model for your space and cooking style, you’ll find meal preparation quicker and easier, and cleaning more manageable. Use our expert guide to find the right hob for you. 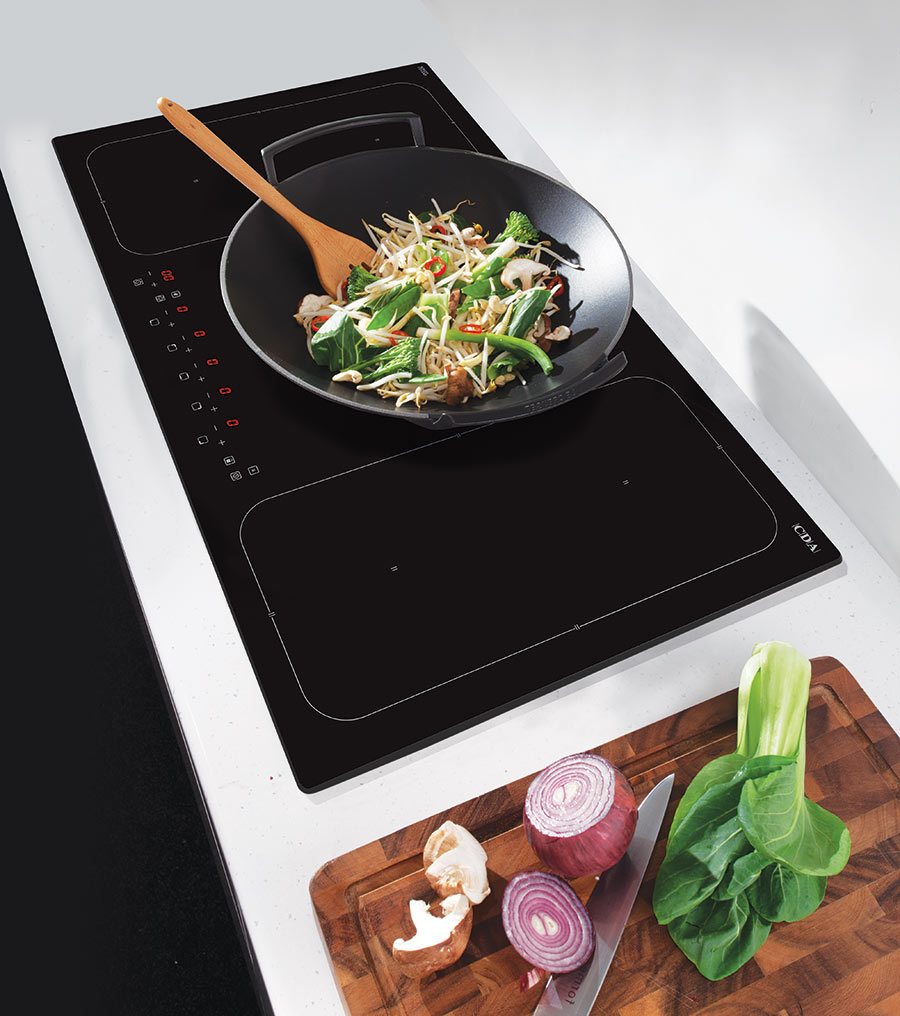 The HN9611FR induction hob from CDA allows you to boost heat, melt and simmer food or even pause cooking by simply pressing the touch controls. It retails for around £884.

The most popular hobs feature four burners – referred to as zones on ceramic and induction hobs – on a 60cm-wide rectangular panel. If you have more worktop space (and budget) 70cm and 80cm hobs are also available. These will usually have up to five burners, or four along with a specialist wok burner. The largest hob size generally available is 90cm.

It’s not just the number of burners that counts, but the type too. The most common arrangement is one large burner, with two medium and a less powerful simmer ring. This combination suits most households since you’re unlikely to need to boil four big pans at once.

Larger hobs with five or six burners often have a similar configuration, combined with an additional wok burner that’s ideal for stir frying or for boiling large pans of water quickly. 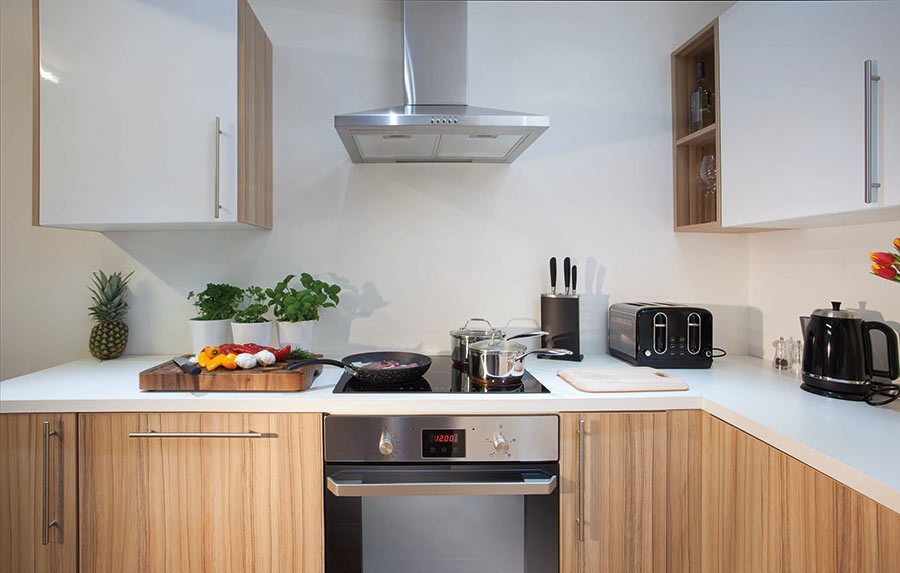 If you’re on a budget, shop around for affordable appliances such as this four-zone ceramic hob with touch controls from Matrix, priced £185.92.

If the space you have for your hob is wide but not deep, consider a linear model. These are usually 90cm wide but only 35 to 40cm deep, and instead of the standard square formation, have three or more burners or zones laid out alongside each other. This arrangement also prevents you from having to reach over hot pans to get the back burners. 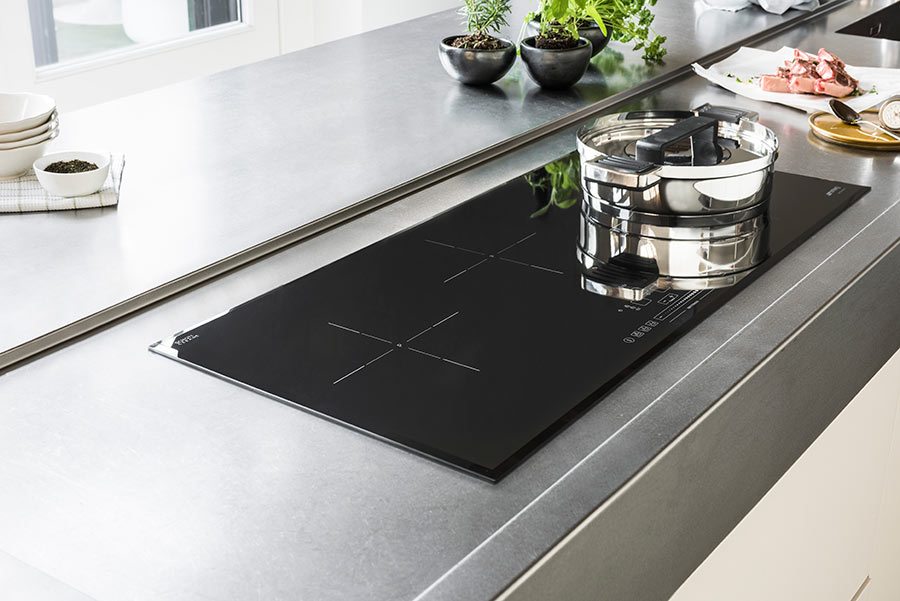 The Smeg Dolce Stil Novo induction hob is 90cm wide and costs around £899. Made from the Eclipse black glass, it’s opaque when not in use and transparent when switched on.

Gas is the traditional choice and, for many people, it’s the only cooking fuel in which they have confidence. “Gas hobs are generally more popular because they offer a visual source of instant heat. Plus, the flames can be easily controlled and evenly distributed,” says Lucy King of Smeg.

Gas is increasingly seen as a poor relation to the more energy efficient induction hob, but the gap is narrowing. For example, the Hotpoint hob shown below features direct flame technology, which claims to offer even heat distribution across the entire surface of the pan, saving up to 20 per cent in energy and cooking time.

There’s no longer any need to rule out a gas hob if you don’t have mains gas, either. Many hobs can be converted to accept liquid petroleum gas (LPG). Concerned about safety? Most gas hobs are fitted with flame failure devices, which stop the gas if the flame is extinguished. 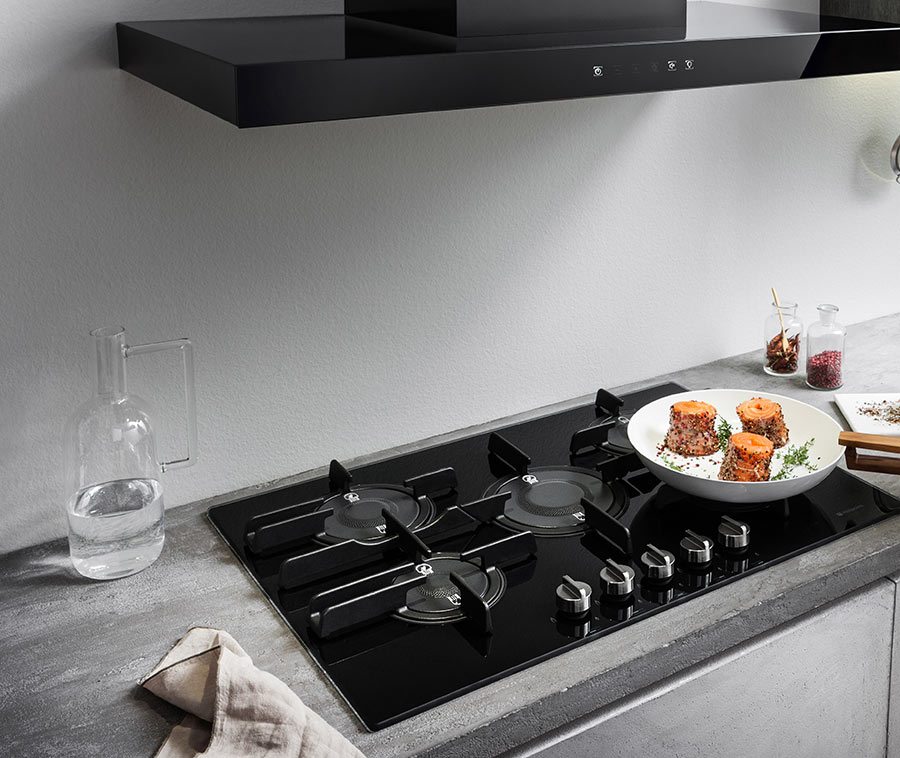 Key features of this FTGHG 751 D/H gas-on-glass hob from Hotpoint include five gas burners with patented direct flame technology. It’s available from around £509.99.

Traditionally made of stainless steel, gas hobs can be tricky to keep clean. It’s worth paying more to maintain the pristine look: “If you’re going for a stainless steel hob, make sure you invest in a quality one or risk losing the shine,” advises Lucy.

Consider models featuring specialist coatings that preserve the natural shine of the stainless steel, and keep well stocked up with stainless steel cleaning products and e-cloths for your cleaning routine.

Alternatively, you could explore a gas hob with a glass bases – a modern update to stainless steel. Although glass lacks the industrial appeal of stainless steel, it’s much easier to clean because glass is more difficult for food to stick to. 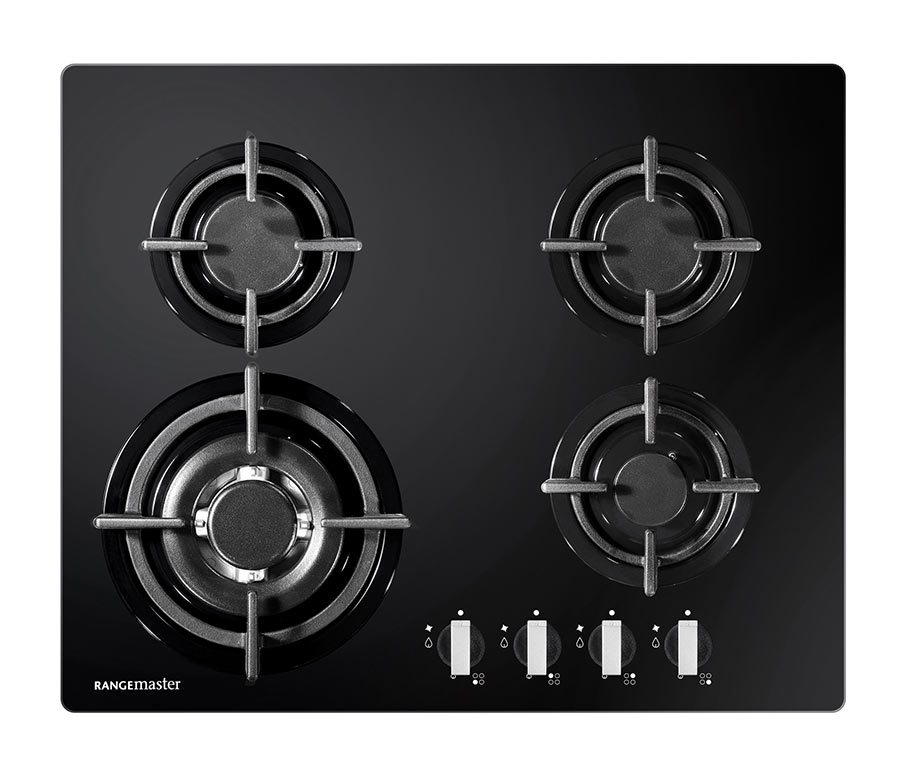 So, what about ceramic hobs?

Before induction, ceramic hobs were the go-to alternative to gas. They haven’t gone away: in fact, they’re still widely available and still offer a good spec for a reasonable price.

Ceramic hobs feature heating elements underneath the glass surface that warm up and transfer heat to the selected zone. They’re generally slower to heat up and cool down than induction hobs, less easy to control and less energy efficient. However, unlike induction hobs, they don’t need specialist pans (more about this later).

The ceramic look is attractive too. The surface doesn’t have pan supports, so it’s sleeker and easier to clean than a gas model. 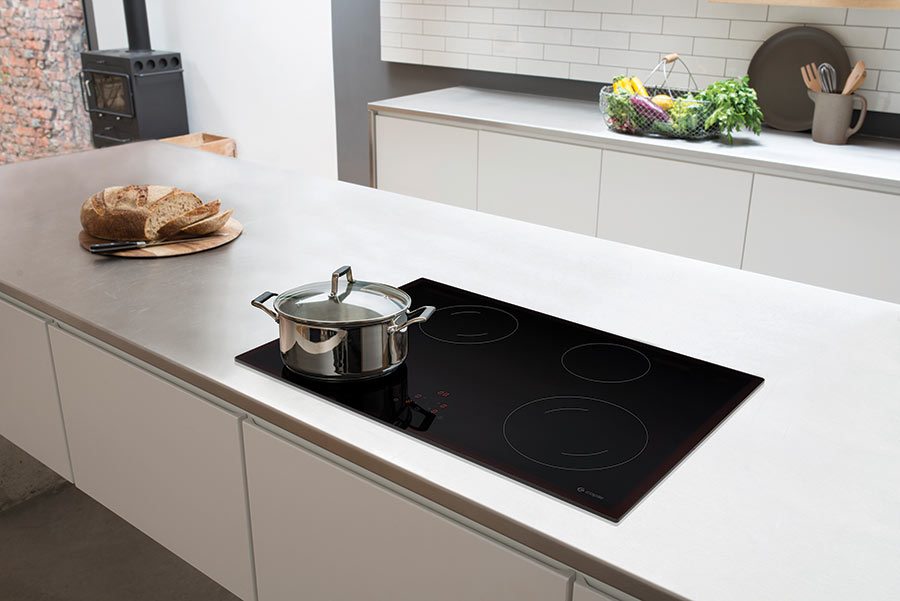 The four ceramic plates featured on the 78cm-wide C824C ceramic hob from Caple  are operated by touch controls. This model costs around £497.

Generally more expensive than ceramic, induction hobs contain magnetic coils that react with compatible pans to create energy and heat. This means that only the base of the pan is heated, not the whole zone, so there’s no wasted energy. “Induction hobs provide precise and accurate temperatures every time you cook and, at high heat, they’re almost double the speed of gas,” explains Juan Pillay of Hoover Candy Group.

Plus, the restricted cooking area makes induction hobs suitable for homes with small children as no hot surfaces as ever exposed. What’s more, because the surrounding surface is always cool to the touch, nothing can burn onto it, so it’s easy to clean.

Other child-friendly benefits to look for include a safety lock to prevent the hob being turned on accidentally, and an automatic function that shuts down cooking zones that have been operating for an unusually long time, making sure the hob can’t be left on by mistake.

It’s worth noting that if you opt for induction, you may need to purchase a new set of pans. Only magnetic iron-based materials such as cast iron or stainless steel will work on induction. 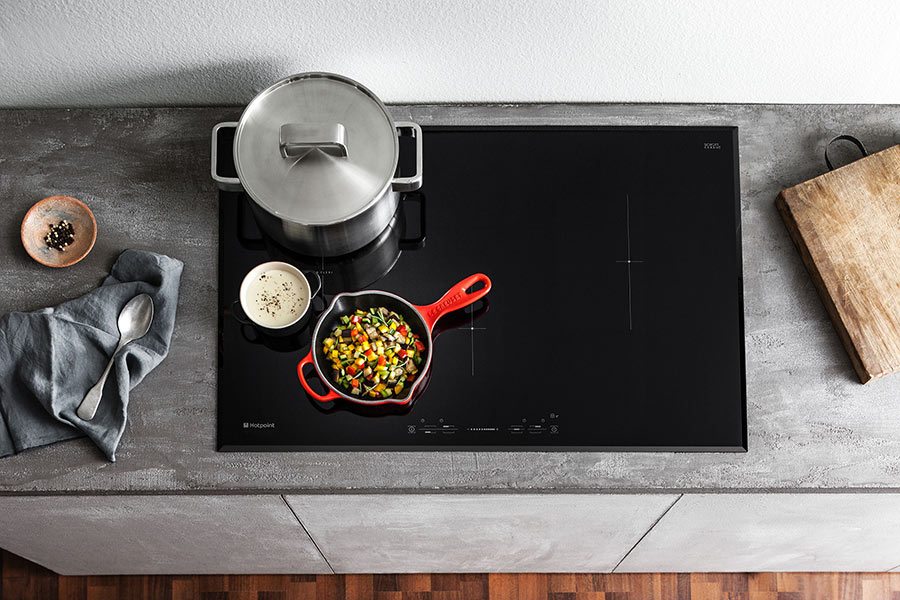 This Hotpoint induction hob (CIF 952 BXLD B) features flexi-zone technology, which allows you to combine two cooking zones to create a larger cooking area. It retails for around £989.99.

One of the key benefits of induction cooking is that it’s adaptable. Many models (including Indesit’s Aria hob, shown below) offer flexible induction zones that you can combine to create larger cooking areas for bulky pans. 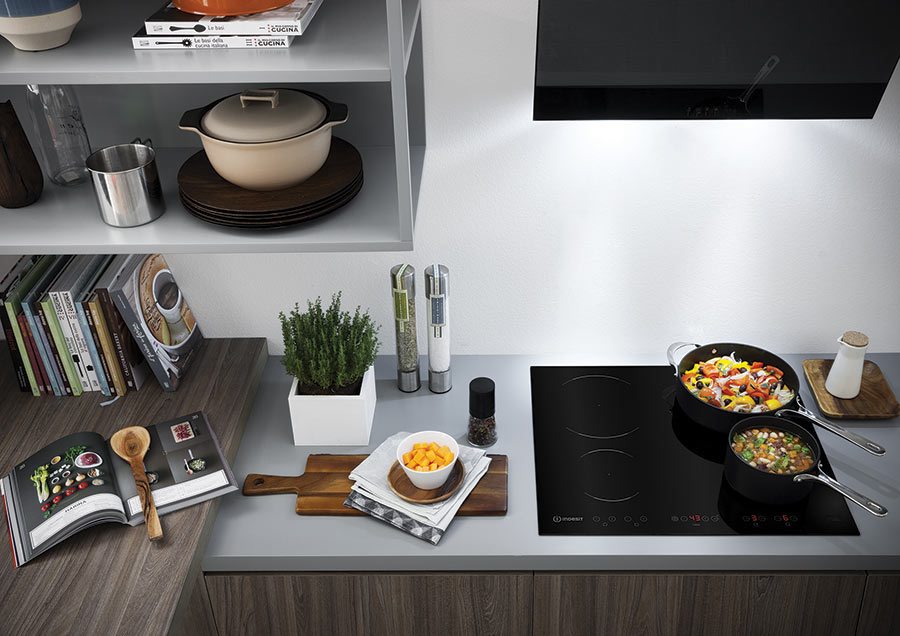 Alternatively, find flexibility with Whirlpool’s SmartCook induction hob (SMP 778/C/NE/IXL), which offers zoneless cooking. Place your saucepan anywhere on the hob and the surface will detect its size and position, heating just that spot to save you money and energy. 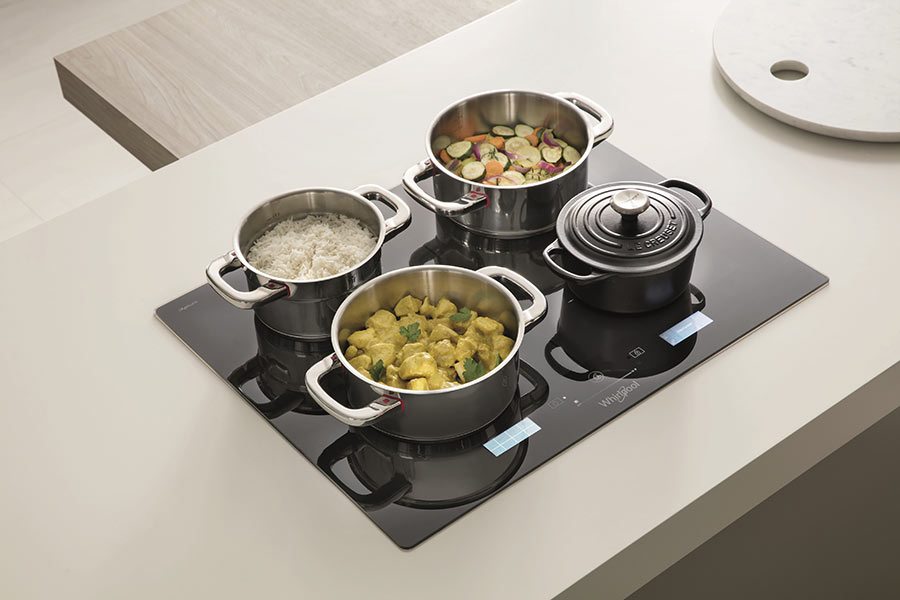 If you can’t choose between gas and induction, look at dual-fuel models that have an induction zone on one side and gas burners on the other. A popular configuration is several induction zones sat alongside a single gas wok burner (see below). 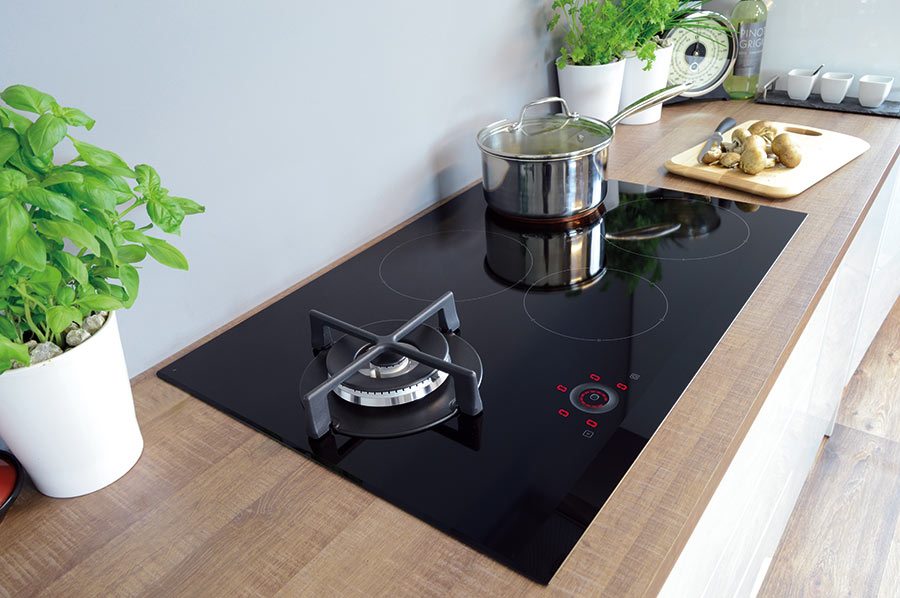 The HNG7410FR from CDA combines induction and gas cooking so you can cook different cuisines on the same hob. It costs around £690.

Alternatively, create a customised cooktop with a series of domino hobs (see below). They’re smaller than standard hob burners – around 30cm-wide – and can be mixed and matched to suit your favourite cooking styles. Want an induction hob with a teppan-yaki griddle and a wok burner? Domino hobs are your solution. 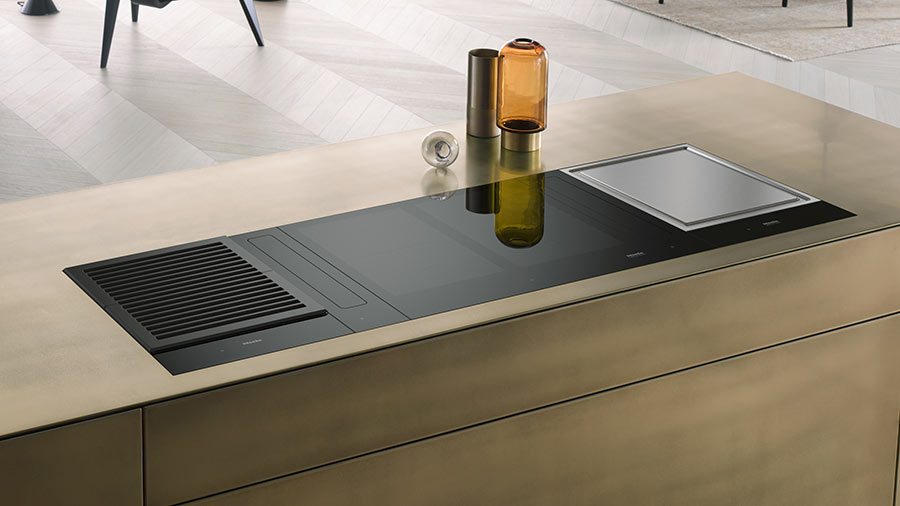 Safety first: gas hobs should only be fitted by an installer on the Gas Safe Register. Similarly, get a qualified electrician to fit an induction or ceramic hob.

Also check with the manufacturer of your appliance about where to place the extractor hood above the hob. As Jennifer Taylor of Whirlpool explains: “We recommend the minimum distance between the pan supports on the hob and the lowest part of the extractor is no less than 500mm for an electric hob and 650mm for a gas hob.”

Ceiling extractors are obviously mounted a good deal higher than this, but they need a more powerful extractor motor. Take advice from an extraction specialist and a kitchen designer, as both the extractor and its ducting will need to be built into the plans for your kitchen.

It’s possible – and increasingly popular – to install a hob on an island so you can face into the room while you’re cooking. Just be aware that you’ll need to create a safe distance between the hob and any breakfast bar seating. Think about a downdraft extractor that rises out of the worktop when it’s being used: this can be both a practical extraction solution and a barrier between the hob and the rest of the island.

Alternatively, the latest in extraction is to integrate an extractor into the hob. This is ideal if you who don’t want to compromise on aesthetics or functionality. 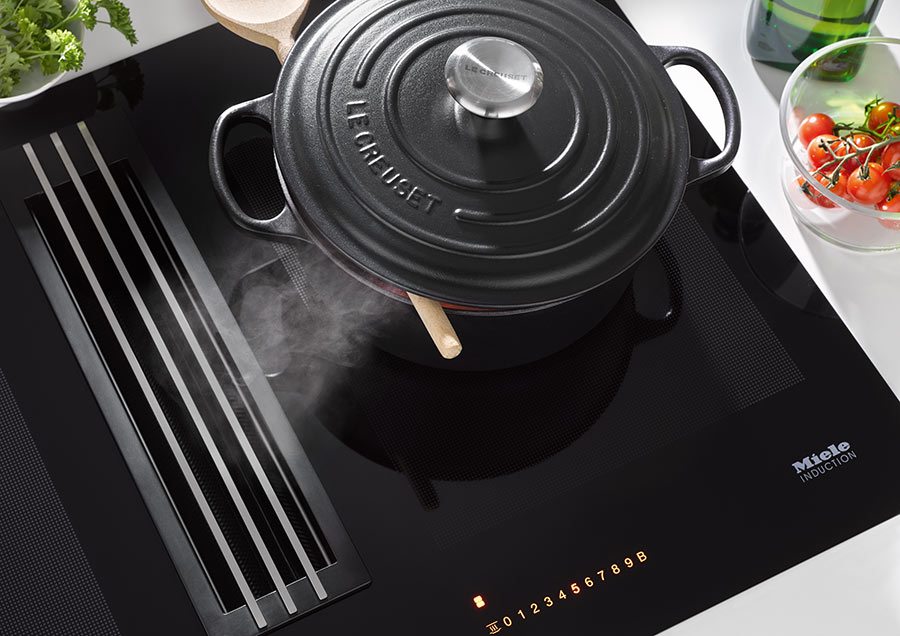 The kitchen is playing a central role in the IoT (internet of things) revolution, with wi-fi-enabled appliances that can be controlled by apps becoming ever more popular and innovative. Cue the Hoover Wizard 60cm wi-fi flexi-zone induction hob, whose app allows you to turn the hob on and off remotely, activate the child lock and even check the time remaining on your cooking – great for checking on meal progress without getting up from the sofa. 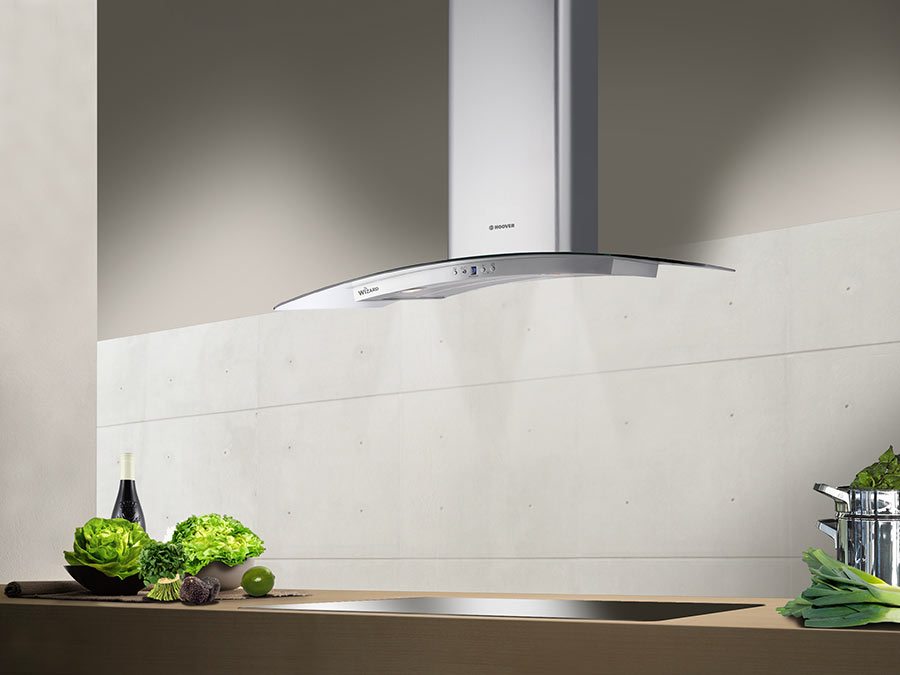 The future has arrived with the Hoover Wizard 60cm wi-fi-enabled flexi-zone induction hob, which can be controlled via an app. It retails for around £499.