Home ownership a distant dream for millions as house prices continue to rise.

Residential property prices rose across the UK once again in November taking the average property value in the UK to £217,928, making it harder for first-time buyers to get a foot on the housing ladder.

House price inflation now stands at 6.7% in the year to the end of November after having fallen to 6.4% in October, the latest UK HPI figures from the Office for National Statistics (ONS) show.

In England, the November data reveals an annual price rise of 7.2% which takes the average property value to £234,278. Monthly house prices have risen by 1.1% since October 2016.

“The severe shortage in supply combined with record low borrowing rates is persistently pushing up prices,” he added.

The UK HPI data, provided by Land Registry, Registers of Scotland, Land & Property Services/Northern Ireland Statistics and Research Agency and the Valuation Office Agency, masked some wide regional variations, with property prices in Rutland increasing by 20.7%, while Aberdeen and Inverclyde in Scotland saw values decline by 7.8%.

Alistair Wilson, head of retail platform strategy at Zurich, said this increase would only make it harder for the average first-time buyer to afford to buy a property.

He commented: “The rises reinforce that for many, owning a home will still feel like a distant dream. As our research shows, whilst one in ten have an ambition of home ownership, more than two thirds of those actively saving do not think they will have enough to ever afford it.”

The ONS’ data shows that by November 2016, prices were growing at almost exactly the same rate as they were a year before, illustrating the property market’s stoic resilience, which has silenced the doomsayers.

Jonathan Hopper, managing director of Garrington Property Finders, said: “After dusting itself off from the Brexit shock, the market recovered steadily at the tail end of 2016 as would-be buyers who had held off in the referendum’s immediate aftermath returned to the fold.

“That initial procrastination has now been replaced by cautious optimism in many parts of the UK, and on the front line activity has been brisk during the early weeks of 2017.

“There is a lot of competition for mid-priced properties as there’s simply not enough stock to go around.”

At the top end of the market – and in pockets of London – buyers now enjoy the upper hand, and are increasingly able to push for and get discounts, but property prices in outer London boroughs continue to rise, amid a chronic housing shortage. 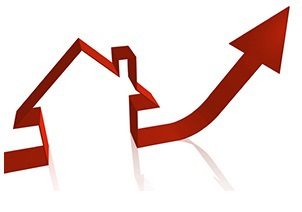 The latest figures show an annual price increase of 8.1% in London which takes the average property value to £481,648. Monthly house prices have risen by 1.8% since October 2016.

He continued: “Many had assumed Londoners would batten down the hatches in the wake of the referendum vote and the stamp duty hike, embodying the ‘don’t move, improve’ ethos. As a result, the lack of fresh listings would see asking price growth constricted.

“Instead, this data brings into sharp focus the growth proposition of certain areas of the capital, including Barking and Dagenham, which was among the top three local authorities in the whole of the UK for house price increases over the last year – seeing prices soar 17% since November 2015.

“Fuelled by the promise of beefy infrastructure projects – such as Crossrail – the outskirts of London are looking increasingly attractive alternatives to the supercharged core.”

Find out how much your property is worth using our Free Online Valuation Tool.