Home » All The Latest Property News » Asking prices are too high

Almost a third of properties currently for sale in major UK towns and cities have been reduced in price.

Almost a third of homes currently on the market for sale have been reduced in price, while 17 of the 20 towns and cities with the highest number of price drops are in the north of England, fresh research shows.

Online estate agents HouseSimple looked at current listings on property website Zoopla for 100 major towns and cities across the UK, and found that 31.3% of properties listed on the property website had been reduced in price. 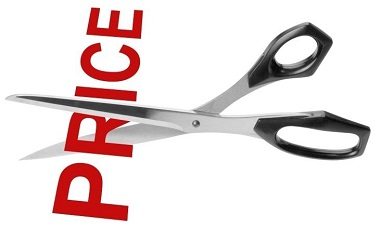 In eight of these towns, more than 40% of properties currently for sale have had the initial asking price cut.

In Stockton on Tees in County Durham almost half the properties – 49.2% – being marketed have been slashed in price to secure a sale. While in Aberdeen, almost 46% have had a price reduction. This compares with Salford where just 12.3% of properties have been reduced in price.

The study shows a clear north-south divide, with 17 out of the top 20 locations in terms of price reductions in the North of England or Scotland. Just one city in the south of England features in the top 20 list – Oxford – with 36.8% of properties having been cut in price since they were first listed.

The following table shows the 20 major UK towns and cities with the highest percentage of properties currently being advertised that have been reduced in price:

Of the three largest cities in the UK, London has the highest percentage of properties currently being marketed (30%) that have had a price reduction since they were initially listed. This compares with 27.6% in Birmingham and 19.9% in Manchester.

Alex Gosling, CEO of HouseSimple, said: “Price reductions can indicate that there are too many sellers and not enough buyers, but actually there has been a lack of stock coming onto the market and plenty of buyers looking. That would suggest that sellers are in the driving seat and wouldn’t need to drop their asking price to secure an offer. But with all the economic uncertainty, particularly around Brexit, buyers are being more cautious about purchasing, spending more time viewing multiple properties before making a decision.

“If sellers are committed to selling, then cutting the price is likely to attract more buyers, and particularly those buyers who have expressed an interest but are sitting on the fence.

“For anyone selling a property, there needs to be a lowest price you’re willing to take so that you are prepared to negotiate if a strong buyer – someone with finance in place who can move quickly to exchange – makes an offer.

“Sometimes holding out for an offer that might be a few thousand pounds more could result in your property sitting on the market for months.”