A couple would like the WC in their ensuite screened off from the rest of the room and want to include a bath and separate shower. Can Willbond help?

Dawn and Andy Gibson have extended their 10-year-old property with a large kitchen downstairs and new master bedroom above. This has resulted in a family re-shuffle with daughter Mia, 13, taking her parents’ old bedroom, freeing up Mia’s room to be converted into an ensuite for Dawn and Andy. 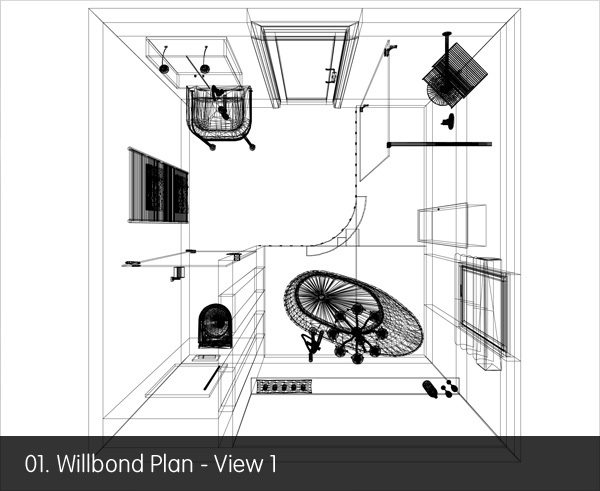 Dawn has very specific requirements for her new ensuite. She would like a shower so that she doesn’t have to compete with her two teenage children for the family bathroom during the morning rush, but she would also like a bath where she can enjoy a long soak and ideally she would prefer a freestanding design. Dawn has also asked that the WC be divided from the rest of the bathroom. The Gibsons prefer neutral colours but don’t want the bathroom to be dull. Dawn says, “We want the room to be a luxurious, grown-up space.”

The ensuite is virtually square, measuring 2.95 x 2.8m. Previously Mia’s bedroom, there is no existing plumbing so the designers are not tied to the location of the soil pipe which usually dictates the position of the WC. The bedroom window was on the end wall. This is now a door leading into the master bedroom extension. A new window will be opened up in the side wall, but due to planning restrictions this will be small, measuring just 60cm wide. As such, there is a risk that with limited natural light the new ensuite could be gloomy.

Willbond has four specialist bathroom showrooms in Nottingham, Derby, Grantham and Chesterfield. Kim Butler works as a bathroom designer for the Derby branch.

In response to the Gibsons’ specific request, Kim started her design by creating a separate cubicle for the WC. Because of the small window she suggests a frosted glass door and two frosted glass panels set into the stud wall to let in as much natural light as possible. Kim has specified a Duravit Starck3 wall-hung WC with concealed frame and cistern, together with a gloss white and chrome flush plate. Built-in storage has been added above the WC. 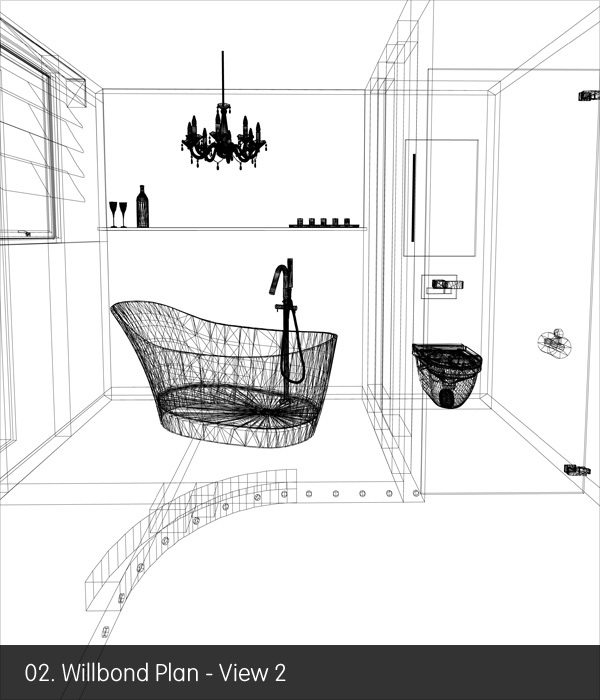 Kim then turned her attention to the freestanding bath, opting for the Sunstone slipper bath from Royce Morgan. “This takes centre stage on a raised platform, giving the bathroom boutique chic style, while a chandelier above adds understated elegance. I have also introduced a large mirror above the bath to give the illusion of space – the reflection of the chandelier in this is stunning,” she says. 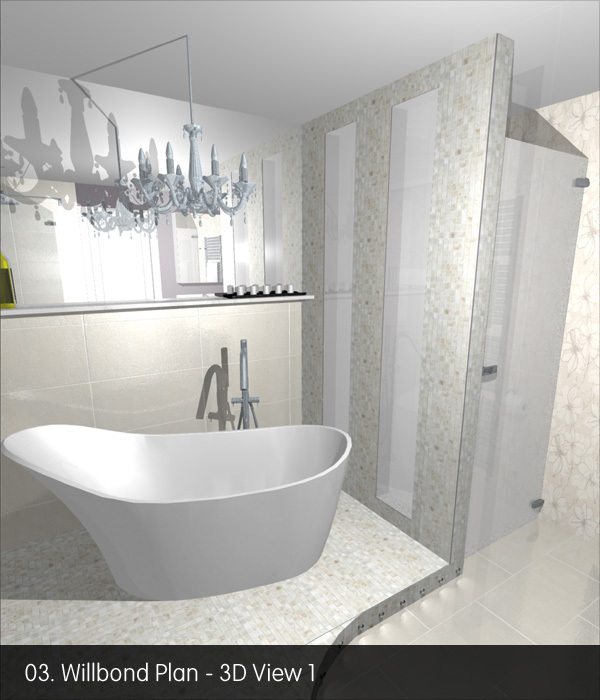 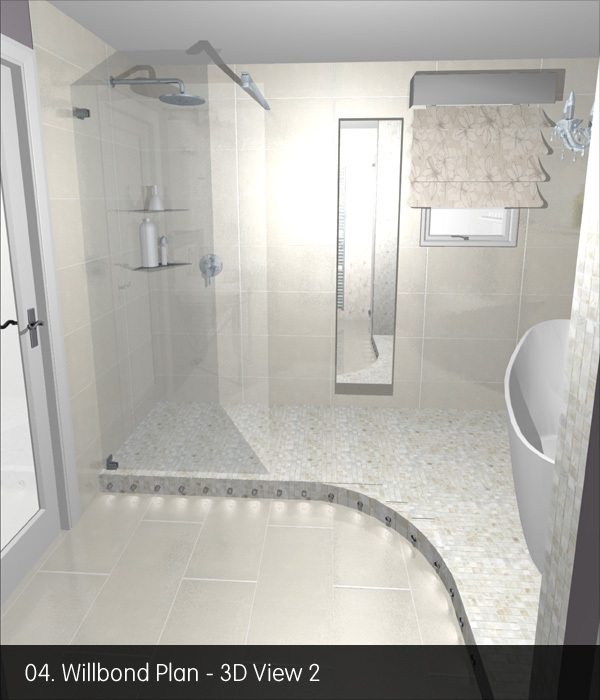 In addition, the raised platform creates a wet floor shower area, with small tile lights built into the step, creating a tranquil, atmospheric feel in the evening. A Hansgrohe Raindance overhead shower is screened behind a Daryl glass panel, providing a comfortable showering area with the bathroom protected from splashes. Kim would include a drying area at the end of the shower with a Keuco tall mirror unit. “This unit ensures the ensuite stays tidy and clutter-free but also has the added advantage of a full-length mirror,” she explains. A Duravit Happy D basin on a chrome stand has been used to complete the classic yet contemporary look. Next to this is a chrome heated towel rail. 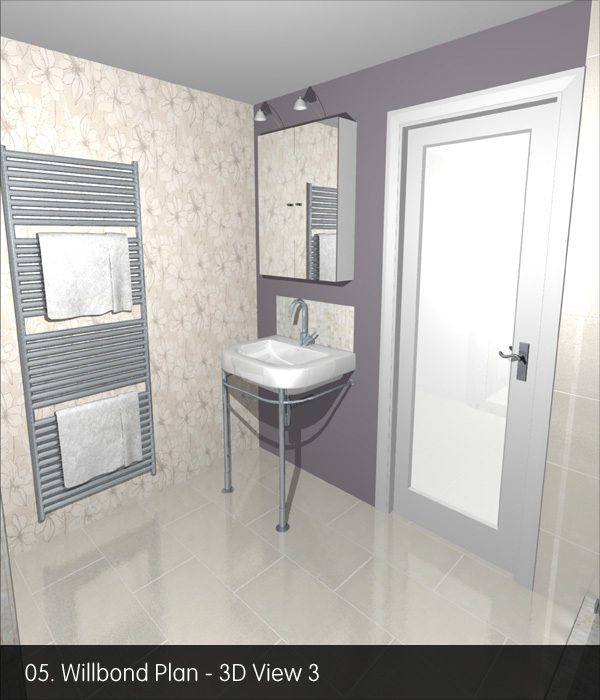 “A selection of tiles, paint and wallpaper has been used to emphasise tones and textures,” says Kim. Pearly mosaic has been used for the platform floor, as a splashback around the basin and against the frosted glass windows. Large-format limestone-effect tiles have then been used on the rest of the floor and walls. “The use of wallpaper is a key trend in 2012,” says Kim. “I chose Harlequin’s Boutique Spirit. This adds a glamorous touch and the Gibsons can continue this theme into their new master bedroom.” 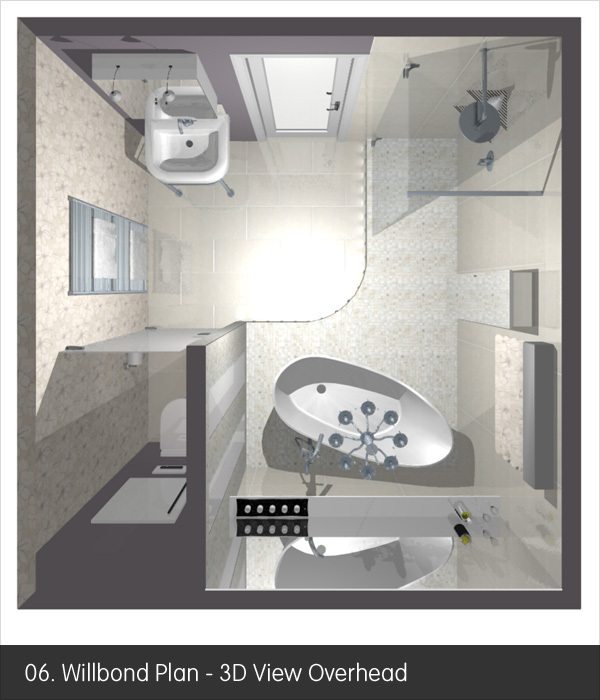 LED lighting, mirrors, glass and high-gloss surfaces have been used to help bounce light around the room while keeping to the neutral colour scheme favoured by Dawn. Kim says, “With the freestanding bath, chandelier and wallpaper, the Gibsons’ bathroom has a luxurious quality.”

Dawn says, “I love the touches of glitz in this design with the decorative wallpaper, chandelier and sparkling mosaic tiles. The raised platform, allowing for lighting at floor level, is another great idea. This ensuite would be a luxurious extension to our bedroom.”

Andy is equally enthusiastic. He adds, “I really like how Kim has separated the WC from the rest of the bathroom. By using frosted glass for the panels and door the cubicle blends in with the rest of the décor; it’s the perfect solution, creating privacy without compromising on style.”

The living room is the nucleus of every home, and it is …